When you book with an account, you will be able to track your payment status, track the confirmation and you can also rate the tour after you finished the tour.
Sign Up
521

Egyptian land is widely known for its fantastic architectural achievements in all of human history, which can be found within its borders. Many Pharaohs of Ancient Egypt favored colossal construction projects, building many monuments, statues, and tombs in their own name and in the name of their gods. From ancient pyramids in the deserts to exotic fauna and flora, the Egyptian educational tour is the one to take! 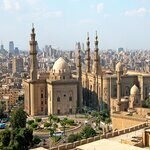 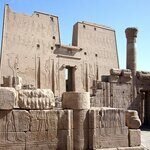 Arrive in Cairo. Visit the beautiful city of Cairo, guided by our tour director.

Take a tour of Memphis: Memphis was the ancient capital of the first nome of Lower Egypt, and of the Old Kingdom of Egypt from its foundation until around 2200 BC and later for shorter periods during the New Kingdom, and an administrative center throughout ancient history. Visit Sakkara: Saqqara (Sakkara) is a vast, ancient burial ground in Egypt, serving as the necropolis for the Ancient Egyptian capital, Memphis. Saqqara features numerous pyramids, including the world-famous Step pyramid of Djoser, Step Pyramid: Pyramid of Djoser (Zoser), or step pyramid is an archeological remain in the Saqqara necropolis, Egypt, northwest of the city of Memphis. It was built for the burial of Pharaoh Djoser by his vizier Imhotep, during the 27th century BC. Take a tour of Giza: Giza or Gizah is the third-largest city in Egypt. It is located on the west bank of the Nile River. Visit the Great Pyramid of Cheops: The Great Pyramid of Giza (also called the Pyramid of Khufu and the Pyramid of Cheops) is the oldest and largest of the three pyramids in the Giza Necropolis, It is the oldest of the Seven Wonders of the Ancient World. Visit Sphinx: A sphinx is a mythological creature that is depicted as a recumbent feline with a human head. It has its origins in sculpted figures of a lioness with a female human head. Board your overnight train to Aswan.

Board your Nile cruise. Visit the High Dam: The Aswan Dam is the general name for two dams, both of which are situated across the Nile River in Aswan, Egypt. Since the 1950s, the name commonly refers to the High Dam. See the Unfinished Obelisk: The unfinished obelisk is the largest known ancient obelisk, located in the northern region of the stone quarries of ancient Egypt. Sail in a felucca: A felucca is a traditional wooden sailing boat used in protected waters, particularly along the Nile in Egypt.

Sail to Kom Ombo: Kom Ombo or Ombos and Ombi is an agricultural town in Egypt famous for the Temple of Kom Ombo. Visit the Kom Ombo Temple: The Temple of Kom Ombo is an unusual double temple built during the Ptolemaic dynasty in the Egyptian town of Kom Ombo. Some additions to it were later made during the Roman period. Continue on to Edfu: Edfu is an Egyptian city, located on the west bank of the Nile River between Esna and Aswan, with a population of approximately sixty thousand people.

Visit the Temple of Horus: Horus is one of the oldest and most significant deities in the Ancient Egyptian religion, who was worshipped from at least the late Predynastic period through to Greco-Roman times. Sail to Esna and continue on to Luxor: Luxor is a city in Upper Egypt and the capital of Luxor Governorate. Luxor has frequently been characterized as the “world’s greatest open-air museum”, as the ruins of the temple complexes at Karnak and Luxor stand within the modern city.

Visit The West Bank: The west bank at Luxor is one of the most important archaeological sites in the world. It is much more than what we refer to as the Valley of the Kings, though many have called the whole of the area by that name. In fact, many good books on the west bank at Luxor are titled, “Valley of the Kings”, even though they cover the entire area. It can be a bit confusing for the novice, particularly considering the actual conceptual scope of the religious concept. If one looks at just the Valley of the Kings, one only sees tombs, but the tombs were an integral part of larger mortuary complexes. Indeed, the whole west bank is honeycombed with tombs, not just of the ancient Egyptian Kings, but of their families and the noblemen who served them. Valley of the Kings: The Valley of the Kings is a valley in Egypt where, for a period of nearly 500 years from the 16th to 11th century BC, tombs were constructed for the kings and powerful nobles of the New Kingdom.

Temple of Hatshepsut: The mortuary temple of Queen Hatshepsut is one of the most dramatically situated in the world. The queen’s architect, Senenmut, designed it and set it at the head of a valley overshadowed by the Peak of the Thebes, the “Lover of Silence” where lived the goddess who presided over the necropolis. A tree-lined avenue of sphinxes led up to the temple, and ramps led from terrace to terrace. Colossi of Memnon: Perhaps the most imposing monument on the West Bank at Luxor is the famous ‘Colossi of Memnon’. These massive quartzite statues which once flanked the entrance to Amenhotep III’s mortuary temple now stand virtually alone in a field at the side of the road to the Valley of the Kings. Disembark on the East Bank

Visit the East Bank, Karnak, and Luxor Temples: Karnak Temple: The Karnak Temple Complex usually called Karnak comprises a vast conglomeration of ruined temples, chapels, pylons, and other buildings, notably the Great Temple of Amen and a massive structure begun by Pharaoh Ramses II. Luxor Temple: Luxor Temple is a large Ancient Egyptian temple complex located on the east bank of the River Nile in the city today known as Luxor and was founded in 1400 B.C.E. Board an overnight train to Cairo.

Arrive in Cairo Take a tour of Cairo Citadel: One of Cairo’s most popular tourist attractions is the Citadel, located on a spur of limestone that had been detached from its parent Moqattam Hills by quarrying. The Citadel is one of the world’s greatest monuments to medieval warfare, as well as a highly visible landmark on Cairo’s eastern skyline. Particularly when viewed from the backside (from the north), the Citadel reveals a very medieval character. Khan El Khalili bazaars: Khan el-Khalili is a major souk in the Islamic district of Cairo. The bazaar district is one of Cairo’s main attractions for tourists and Egyptians alike the market was built in 1382 by the Emir Djaharks el-Khalili in the heart of Fatimid City. Visit the Egyptian Museum: The Museum of Egyptian Antiquities, known commonly as the Egyptian Museum, in Cairo, is home to an extensive collection of ancient Egyptian antiquities. It has 120,000 items, with a representative amount on display, the remainder in storerooms. The museum’s Royal Mummy Room, containing 27 royal mummies from pharaonic times, was closed on the orders of President Anwar Sadat in 1981. It was reopened, with a slightly curtailed display of New Kingdom kings and queens in 1985. Today there are about 9 mummies displayed. One of them is the newly discovered mummy of Queen Hatshepsut.

This information is primarily for parents: All our tours are teacher led. If you’re interested in sending your child a tour, please send us the contact information of the concerned teacher in his/her school. We will contact the school authorities and pursue it further. Once the school approves the tour, students can register for the tour.

Manage Deadlines: Triplou Educational Tours makes all the arrangements for your tour months in advance. It is important for you to adhere to all the payment deadlines provided to you to ensure that your child’s reservation is secure.

Get Prepared For The Tour: You will receive a detailed itinerary, details of hotels and a copy of your ticket from us. Students should spend some time on preparation work. Your child should read up about the places they are about to visit.